Waheed Murad: His Life and Our Times – Out Now 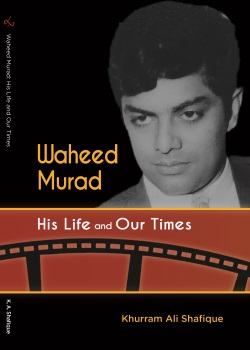 Libredux Publishing is pleased to announce a brand new title: Khurram Ali Shafique’s book, Waheed Murad: His Life and Our Times, which went into print yesterday (16 September 2015) and is already available at Amazon’s US and UK sites. It’s the second title in a series of three titled Visionaries for Our Times. (The first of the series was Libredux’s previous publication: Iqbal: His Life and Our Times.) The third installment in the series, on the life of Cyrus the Great, will be released within the next year.

Following from the themes of the first book, this is not merely a biography of Pakistan’s greatest film star. It’s the story of a visionary whose films aimed to reflect the ideals of Iqbal.

The face that changed the way a nation saw itself

Presenting the first complete biography of Waheed Murad, covering the diverse aspects of his enchanting personality – filmmaker, writer, superstar and the man behind the legend. In these pages you will discover his unique vision for an ideal world: One that can be created through love and a strong will, where intellect and reason have failed to do so.

Khurram Ali Shafique is an internationally renowned scholar of Iqbal Studies, and a recipient of the Presidential Iqbal Award. He is also a screenwriter, educationist and historian. He began writing this book soon after the death of Waheed in 1983, but it took more than thirty years to piece together all the parts of this amazing story.