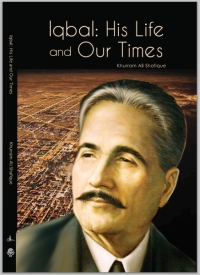 As an update to my previous message, the UK/US edition of Iqbal: His Life and Our Times is due for release on Thursday 8 May at 8 p.m. British time. If you purchase a copy directly from CreateSpace in the first 72 hours, you will get a discount of 15% off the price (follow the instructions on that page). This discount applies to the US price but you will save money even if you are purchasing from outside the US (including but not exclusively Canada, Australia, UK and elsewhere in Europe). Don’t miss out!

The general edition will be released in Pakistan soon – date to be confirmed. If you would like updates on the Pakistani release, let me know and I’ll put you on a temporary mailing list for the purpose.

In the meantime, below is the introduction to the book by the directors of the Iqbal Academy and the ECO Cultural Institute, as taken from the author’s (Khurram Ali Shafique) mailing list and blog at the Marghdeen Learning Centre.

All the Best, & Take Care Folks,

Dr. Sir Muhammad Iqbal (1877-1938) is the only poet and thinker in the history of world literature who has been credited with the birth of a new nation and a new state. It is therefore very befitting that a handbook about his life and thought should be brought out by an organization comprising of ten member states. The Economic Cooperation Organization’s Cultural Institute (ECI) is pleased to bring out this publication jointly with Iqbal Academy Pakistan.

In addition to his unique status in Pakistan, Iqbal also happens to be either a national poet or a household inspiration in several other countries including Iran, Tajikistan, Kazakhstan, Kyrgyzstan, Turkmenistan, Uzbekistan and India. In Turkey, his symbolic grave stands in the compound of the mausoleum of Maulana Jalaluddin Rumi. In the universities of Heidelberg and Cambridge, there are chairs or fellowships in his name. Roads, buildings and monuments have been named after him in other countries too, including Mauritius.

Iqbal: His Life and Our Times fulfils the need for a simple and reliable introduction to the life and work of this unmatched genius, highlighting the practical relevance of his ideas for those who wish to consider them for implementation. The author, Khurram Ali Shafique, is well-known in the field of Iqbal Studies. The awards which he has received for his previous publications include the coveted Presidential Iqbal Award.

The present volume includes many findings that are the outcome of the author’s original research. Of special interest to the general readers as well as the experts would be the evidence, presented here for the first time, which establishes a historical connection between the political ideas of Iqbal, the American thinker Mary Parker Follett and the Bengali visionary C. R. Das.

We are hoping that this volume will offer much by way of looking at the present times from new avenues.

If the nations of the world desire to come closer in their hearts and minds, they cannot ignore to learn about the ideas, emotions and visions of each other. The Economic Cooperation Organization’s Cultural Institute (ECI), formed through a charter at the third summit meeting of the countries of ECO held at Islamabad in 1995, aims at fostering understanding and the preservation of the rich cultural heritage of its members through common projects in the fields of media, literature, art, philosophy, sport and education.

The present volume is being offered in line with this vision, and with the conviction that it is important for everybody to be informed about the ideas of Iqbal, since they may be counted among those cultural forces which have gone into shaping a significant part of our world.

This conviction is shared by Iqbal Academy Pakistan, a statutory body of the Government of Pakistan, originally established through an act of parliament in 1951 and reinforced through an ordinance in 1962. The aims and objectives of the Academy are to promote and disseminate the study and understanding of the works and teachings of Iqbal. The Academy has been translating its objectives into action and activity through a number of measures including publication programme, IT projects, outreach activities, Iqbal Award Programme, website, research and compilation, audio-video, multimedia, archive projects as well as exhibitions, conferences, seminars, projection abroad, research guidance, academic assistance, donations and library services.

We hope that the readers will benefit from the book which we are offering here jointly, and this will go a long way in achieving our common objectives.

Order online from Thursday, May 8