The end of Systems

.
.
*Warning* – This post contains spoilers, and should only really be viewed by those who have read Systems.
Don’t say I didn’t warn you!

On 14 January 2013, Systems will have been in print for exactly one year. For those of you who have already read it, you’ll know that at the end, Hitoshi, Aaron and Elise meet at the nightclub, intending to return to Creux Island and take down the Paragon3 computer program that is presently controlling the world, and replace it with Libredux’s code. We don’t get to see this happen, but it’s obviously implied, so the good guys have as good as won. The story has come to its proper closure.

For some of you, apparently not. A significant number of you have said that the novel’s ending was either too ambiguous or at least left sufficiently open-ended for a sequel. I’ll quote one reader word for word:

I thought it was brilliant – but I was so disappointed by the ending!

Is that how you felt? Now I don’t deny that there is an open-ended, er, ending. I borrowed the idea from Mortal Kombat, at the end of which Lui Kang defeats the sorcerer Shang Tsung and the world is saved. But just as Lui Kang leaves the temple with Raiden, Kitana, Johnny and Sonya, the evil emperor Shao Kahn suddenly appears as a giant crashing through a tower, and announces he has come for their souls. Raiden says: ‘I don’t think so.’ And the fighters all pose for the next battle.

‘You humans are so unpredictable’

That to me was a perfectly wrapped-up-and-yet-open-ended close to the movie, and I wanted to do something similar. So I wrapped up my story up as far as possible in the last few pages, in particular the hospital scene where Aaron and Elise discover what Hitoshi had really found at Creux Island. And at the nightclub, I ended with Hitoshi’s devilish smile to imply that the fight will go on.

But some of you said you would have liked to see the world change in a more definitive way by the end. Others were upset that Hitoshi destroyed the data from the original Systems Experiment, because it would have proved once and for all that Omar’s Libredux model proved an ideal society was possible. (Apparently, one of Hitoshi’s many lies that the Systems Experiment results were ‘inconclusive’ may have put doubt in some readers’ minds.)

I took this complaint seriously. I was concerned that I had failed to communicate the point of the ending well enough. I wrote in confidence to a friend that I was thinking of tinkering with the ending – not to change it but to extend it and clearly show that Hitoshi was similarly tinkering with the Paragon3 code, which was better than having the original data. My friend’s emphatic response:

Please, no. I liked the ending very much. The destruction of the disc is not evil because what it implied for me was that the Truth is not even dependent on one-time data. It will find some other way of manifesting itself.

Well, at least he got it. But he doesn’t count, since he also happens to be a genius. 🙂 My instincts on this are that my original ending was right. I would never show how the world changed at the end, because that would conflict with my convictions that one should never seek to provide a ready-made blueprint of a vision for an ideal society. (Remember: Jinnah and Iqbal never provided blueprints either). But I’ve given it a lot of thought, and I have come to realise where the issue might really lie. And it’s not the Systems Experiment.

Nineteen Eighty-Four – A mirror opposite

One or two readers have compared Systems to George Orwell’s Nineteen Eighty-Four, and I can see the resemblance. Orwell’s novel is set in a future and a dystopian world run by Big Brother. In fact, it’s set exactly 30 years before mine, which essentially begins in 2014. My fictional world is a semi-utopia that is later revealed to be a dystopia run by E3. In both novels, the bad guys deal with rebels by murdering and then writing them out of history.

The Triumvirate Committee – aka E3

Whereas Nineteen Eighty-Four has an undoubtedly tragic and pessimistic ending, Systems ends on a decidedly positive note. But in both stories, the evil rulers persist, and we don’t see them get the comeuppance they deserve. And this, it seems, is the real offending issue in Systems. It’s not the Experiment, or the data, but E3 … the appearance of E3 ultimately getting away with everything.

The penny finally dropped for me after a conversation with an academic who said she wanted to know what would happen to E3 in a sequel. I immediately thought: ‘But E3 is already doomed, once the good guys go back to Creux Island…’ And then I realised that I hadn’t explicitly stated this in the novel. Or rather, it had only been implied, and probably not clearly enough.

Know the Truth and Return to Liberty

So why wasn’t E3 finished off properly, or at least exposed? Well, aside from the fact E3 does lose (albeit after the closing pages) that isn’t even the point of the story. The end of Systems is not about the battle against an external evil, but about an inner battle … of human self-belief. That’s why it’s visionary fiction. It reaffirms a belief, in Manner’s words, ‘in all that is possible’ … what we think is ‘ideal’, but which is not only absolutely possible, but moreover necessary for our evolution. The end of Systems (see what I did there?) was to show that no matter how powerful our dictators and tyrants might seem, it’s a deception. All it takes to defeat the sorcerers is to see through the illusion. Whatever they tell us, human destiny really lies in our own hands, and unlocking our potential is a simple case of knowing it, and acting on it.

A trap – but a flimsy one

Truly the flimsiest of houses is the spider’s house; if they but knew. – The Quran *

When I first started writing this post, I was going to announce my intention to change the ending. But since then, my conversations with some readers have shown me that I only need to change maybe a line. As Roz Morris has recently suggested at her blog, readers are usually right when something is wrong. But they are not always right about what is wrong.

So the ending will stay the same. Phew! But I am planning an edited edition (including that added line, obviously), with some extras …

More information will be made available on the first anniversary edition of Systems, in January 2013. Stay tuned.

* Incidentally, that Quranic quote is directly responsible for the title of Chapter 33 (The Spider’s House), and is a massive clue to the reader as to whether E3 is going to really get away in the end (especially since the Quranic ‘spider’s house’ is a literal allegory for Pharoah, Hamaan and Qaroon, the three symbols of tyranny on which E3 is based!). And Chapter 34’s title, Know the Truth, aside from being the tag line to the novel, is borrowed from the Biblical You shall know the truth and the truth shall make you free. That too is a clue linking Aaron and Elise’s discovery of the truth to the implications for their world … and for E3.

Scorpion and the Peace Man: Interview at Mother/Gamer/Writer 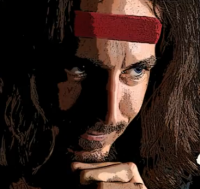 Today I’m being interviewed at the popular reviews site Mother/Gamer/Writer. As well as explaining exactly what Peter Manner (aka the Peace Man) from Systems has in common with Scorpion from the video game series Mortal Kombat, I have also mentioned my search for any metal music bands to help me with recording a song that appears in the novel …

Do head on over there and say hello (you’ll have to scroll down their page!) – if you do, you’ll be in with a chance of winning a signed paperback copy of Systems or an ebook in any format you like.