When we choose liberty 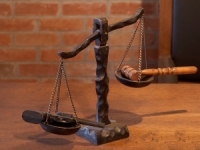 Today I came across a fascinating post at renowned author Lynn McTaggart’s blog, in which she explains why modern society might be on the verge of collapse:

… our biggest group delusion … has to do with the collective assumption and acceptance of the idea that individual ambition serves the common good.  That idea, which built modern capitalism, will be at the heart of its downfall.

What she is practically describing is the ‘invisible hand‘ concept in economics, used to defend capitalism. But it is also another way of saying, in theorem-speak, that when we actively choose ‘liberty’ (individual ambition) over ‘justice’ (common good), we are doomed to fail. In the Systems Experiment too, capitalism fails because, to quote Omar, it ‘focuses on freedom, at the cost of stability’.

McTaggart adds that if society wants to succeed in the long term, its people must adopt a ‘good for me, good for all’ mindset.

In other words, we must choose justice.

Hopefully this sheds light on why the theorem in Systems is summed up in the line: Choose justice and return to Liberty.

Postscript: Liberty (with a capital L) is different to liberty (with a lowercase l). The latter, as individualist ambition, is illusory and not really freedom at all, however it may appear in a society focused on short-term gains. Only by choosing justice can society earn authentic freedom for every individual.

A new book with ‘system’ in the title – out now

Recently I announced that Libredux Publishing was about to release a book in collaboration with another organisation (Tolu-e-Islam, Lahore). The book is out now in paperback, and its title is The Qur’anic System of Sustenance, the long-awaited English translation of G.A. Parwez’s Nizam-e-Rabbubiyat (1955). That makes it the second Libredux book with the word ‘system’ in the title. 🙂

The book has just become available at CreateSpace, as well as at Amazon US and Amazon UK. I will reproduce the editor’s foreword in my next post. In the meantime, allow me to introduce its author.

Ghulam Ahmad Parwez – not to be mixed up with the founder of Ahmadism, Mirza Ghulam Ahmad – was a non-sectarian Muslim thinker with a rationalist approach to Islam. He was born in British India in 1903 and was an activist of the Pakistan movement. He was an associate of Dr. Iqbal; and it was at Iqbal’s suggestion that he set up his monthly journal Tolu-e-Islam in 1938, which is still in print today. He was also an adviser to M.A. Jinnah, the founder of Pakistan. Parwez received a posthumous Tehrik-e-Pakistan (Pakistan Movement) Gold Medal for his services in 1989. But he is best known for his outspoken views on religion, which he considered to be the antithesis of true Islam – and an obstacle in the way of unlocking humanity’s full potential.

Controversy with a capital ‘S’

Parwez wrote numerous books and articles, including the aptly-titled Islam: A Challenge to Religion (his only title originally written in English), a 4-volume lexicon of the Quran (Lughat ul Quran), and a 3-volume expositional and scientific translation of the Quran (Mufhoom al Quran). But perhaps his most important work was Nizam-e-Rabbubiyat (1955), which translates literally to ‘system of (universal) sustenance’. When my father and I translated this book, we changed the title to include the word ‘Quranic’ because the word Rabbubiyat is derived from one of the names of God (Rabb) in the Quran. At the time of its release, the book generated a lot of controversy. Some suggested that his book was a thinly-disguised communist manifesto, due to his anti-capitalist views and the fact that his proposed ‘system’ had a somewhat socialist bent. But in fact Parwez was opposed to both capitalism and communism on the grounds that they are purely materialistic and reject the spiritual (just as he was opposed to religion on the grounds that it is purely spiritualistic and rejects the material).

Parwez said he was actually offering a Quran-inspired economic system as a third alternative to both. But was he really talking about an economic system? Not at all. It would take me far too long to explain why in this post – and anyway, it’s covered in the foreword that will appear here soon. But suffice it to say that what makes Parwez’s proposed ‘system’ different from capitalism and communism is that it is not confined to the material. In other words, it covers more than just economy. The ‘system of sustenance’ presented by Parwez should be understood in much the same way as I have described ‘Libredux’ in Systems – as an open-ended structure distinguished only by the universal ideals at its core. To borrow Parwez’s words, this type of ‘system’ is a means to an end, and not an end in itself.

And what is that end?

The answer is in this very post. Tell me if you spotted it.

Postscript: To celebrate the launch of this title, it will be made available at a reduced price for a limited time. Details to follow in my next post.