Systems in an Iqbal education programme

Yesterday I learned that the Systems trailer has been included in a course (Title: DNA of History: History According to Iqbal) being run by the Marghdeen Learning Centre, a body affiliated with the Iqbal Academy. I felt truly honoured at the mention, especially because of the particular focus of the lesson in which the trailer appeared. (I would have linked to the lesson page, since the course is run online, but you can’t view it unless you’re a participant on the course).

THE AGE OF POTENTIAL

Here are some of the most interesting points made in the lesson by the course teacher, Khurram Ali Shafique:

“Do we find any common strand” in the events of our times? Yes. Everything happening in our times is related to “Potential.”

… Let’s begin with the most basic thing: Tawhid, or the Unity of God. According to Iqbal, the three principles implied in the Unity of God are “equality, solidarity, and freedom.” …

… Let me summarize. What I have tried to share is that we are now living in the age of potential. The three traits of this age are: 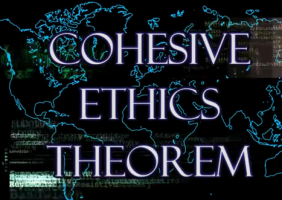 So once again, the focus is on the three ideals that appear in the Cohesive Ethics Theorem. Most interestingly of all, Mr Shafique has stressed that Iqbal’s own reference to these three principles in his famous Reconstruction lectures should be understood literally. In other words, the key to unlocking human potential in full can only come from mastering our understanding of these specific three principles, just as we have begun to unlock the creative potential of the physical universe by mastering our understanding of the laws of nature. As someone says in Systems:

‘Some would say that what I have suggested is utopian, and moreover impossible. This is not so. As I see it, humanity cannot realise its true potential until we accept that an ideal society is not only possible, but absolutely mandatory.’

The lesson opens with this question: Do you think that this video (Systems trailer) is relevant to what is being discussed in this post?

I reply: Why yes, and not in a small way!

And a final note: I highly recommend joining the courses at the Marghdeen Learning Centre. They are cleverly designed to be as informal as possible, while introducing some thought-provoking ideas.