In 2009, I was the co-writer of a ‘good news’ show called Deliver!, which aired on Venus TV in the UK. In the last show of the season, we covered an ‘alternative’ economy model called LETS (Local Exchange Trading System) that was helping communities across the planet to get through recession. We described it as something that takes money ‘out of the equation and rewrites the rules’. It’s still up at YouTube here:

Fast-forward a couple of years to 2011, when Dr. Imran Chaudhry at Pakistan First Research Institute, the research division of PakistanFirst, asked me to co-author a paper for an alternative economy. (I had worked with PakistanFirst once before in a consultative capacity, on a paper making recommendations for provincial reforms in Pakistan.) He was aware of the alternative economy model covered in our news show, and liked the idea enough that he wanted PakistanFirst to present a model specifically tailored for Pakistani rural communities and villages. The resulting paper offers a system based loosely on LETS. We’ve dubbed it VSLE (Value, Skill and Labour Exchange). Like LETS, it’s interest-free and works on the principle of cooperation (collective interest) instead of profit (self interest), but it also has some distinguishing features of its own.

The paper was completed a few weeks ago and it has just been published at Smashwords under the grand title, Emergency Economy (though it’s not necessarily a model just for periods of recession; and its comments apply beyond just microeconomy).

Click here to pick up a PDF copy of this paper for free. You don’t need an account to download it. The provincialism paper I mentioned is available for free as well.

Marghdeen Learning Centre participants: I’d be particularly interested to know your thoughts on this, in light of the fact that the next MLC course promises to contain something ‘practical’. Do you see any similarities – in principle – between this alternative economy model and the ‘Marghdeen’ that Iqbal envisioned? Even if you don’t read the paper, the above video should give you a good idea of what I’m getting at. And this recent post offers a clue as well.

2012 has been an extremely eventful year for me. At the beginning of the year I published Systems and launched this blog soon afterwards (18 Jan). I thought I’d write the odd post here and there, but so much happened this year that I never got round to sharing some of the news here. So consider this post a roundup of 2012, with the previously untold news thrown in. 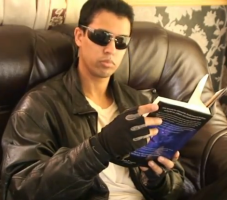 On 2 July, Systems (and its trailer) first became a part of a course (rather aptly, The Wisdom of Moses* course) at the Marghdeen Learning Centre, an associative educational body of Iqbal Academy Pakistan. By 11 October, with the commencement of the course on Biological Unity, Systems attained a permanent part of the reading material, alongside Iqbal’s Reconstruction of Religious Thought in Islam and Khurram Shafique’s 2017: The Battle for Marghdeen (which was published by Libredux Publishing). Anyone who joins these courses gets a free copy of the novel.

And Systems also made a brief appearance on the big screen, with the airing of my brother Shahid Karim’s Terminator spoof titled The Procrastinator at the Bang! Short Film Festival in Nottingham on 24 November.

* In Systems, Prof. Omar is very loosely based on Moses. He is from Egypt, his son is named Aaron, and parts of the Systems story line allude to Moses’ exodus. And of course, E3 is based on the tyrants who were also Moses’ opponents in his time.

Systems was published under the imprint name Libredux Publishing. I had no other plans for Libredux, but it also became the publisher of Khurram Shafique’s 2017: The Battle for Marghdeen on 14 August (Pakistan Independence Day) and also the co-publisher of two other titles shortly afterwards (below).

This year saw the release of two titles edited and translated by myself and my father Fazal Karim: The Qur’anic  System of Sustenance and Did Quaid-e-Azam Want to Make Pakistan a Secular State?, both authored by G.A. Parwez (1906-1985). Both titles were co-published by Tolu-e-Islam Trust and Libredux Publishing.

At present, The Qur’anic System of Sustenance is also being turned into an audio book. My brother Shahid is the narrator.

On 23 March this year this article of mine appeared in the Pakistani newspaper’s Dawn Special Report on the Lahore Resolution of 1940.

This year I collaborated with the think tank PakistanFirst on a paper for an ‘alternative economy’, inspired by a model that was covered in Shahid’s news show Deliver! in 2009 (aired on Venus TV in the UK. See the clip from that show here). The paper is on the verge of release.

I and eleven other authors founded the Visionary Fiction Alliance (17 August), dedicated to promoting fiction of the kind that explores human potential. I’m now one of its admins. The story of how we came together can be found here.

Most of you won’t know that I have taken part in a documentary on Dr. Iqbal’s philosophy, produced by the Iqbal Academy, Pakistan. Parts of it were shot in Cambridge. The filming of my part took four hours in a very hot room (it was the middle of July) but quite enjoyable considering that I have a total (and I mean, total) fear of public speaking. You probably won’t catch me in front of a camera again. 😀 The documentary is still in production and it should be televised some time in 2013.

… And that’s just about everything.

1) The re-release of Systems (re-edited, and with extras)

2) Hitoshi’s song My Fate from Systems to be recorded

3) The Cohesive Ethics Theorem should get a formal write-up, but with a twist

4) Re-making of The Way: My brother’s first ever film, which can be described as having a visionary story line, is being re-made this year. I was the composer of its original soundtrack, and I’ll be the composer again for the remake.

5) More to come. Watch this space.