Although much visionary fiction has magical and fantasy elements in common with the fairy tales of old, the two differ in some fundamental respects. The themes of the conventional fairy tale revolve about the triumph of good over evil, where the heroes are princes and princesses, or peasants who marry princes and princesses and gain a kingdom or an endless supply of gold. The villains are always jealous stepparents, or evil older siblings, or tyrannical kings and queens. At other times they are monsters, or trolls, or wolves. The latter in particular are ugly and incomprehensible, external forces, wreaking havoc on the heroes and their people, or they are cunning creatures luring some naive vulnerable character to do their bidding, reminiscent of Satan misleading Adam and Eve.

The characteristics of the heroes are equally clear-cut: the shining knight, or the prince, or the peasant who turns out to be a missing prince. They are almost exclusively male, and their relationship with the heroine is defined as “pure” or “true love”, betraying the psychological influence of mysticism that compares this form of love to Divine union. In some tales this true love is key to breaking some spell that has trapped the damsel, as is the case in our story of interest to be reviewed here shortly.

Visionary fiction, like the fairy tale, is interested in the good versus evil conflict but like other modern literature, it asks what constitutes “good” and “evil” in the first place, and what might turn a good person bad. Its protagonists are frequently female, and even if they are not the lead, they are rarely damsels in distress. Love may feature as a means of defeating darkness, but it is not narrowly defined within the context of romantic or sexual love. Indeed all these can be said to be part of the modern trend of fiction in general, except that for the most part modern fiction arguably addresses these ideas at a more superficial level.

Few would disagree that visionary fiction is a relatively new (or, as I believe, a recently revived) genre, and that fairy tales remain vastly popular. But as many VF writers will attest, the visionary form is also in demand and gaining ground. And it seems that the old fairy tale might tale up for a revamp to accommodate this change in literary ideal.

Recently I saw Disney’s Maleficent (2014), a live-action adaptation of the fairy tale classicSleeping Beauty and also a rewrite of the 1959 Disney animated movie of the same name in which the evil fairy from the traditional fairy tale was named “Maleficent” for the first time. In the movie trailer, Maleficent is advertised as a fairy tale with a twist – promising to reveal the “truth” behind the “legend” of that spinning wheel curse. The twist is that this is a story told from Maleficent’s point of view, and is an explanation of how this “good fairy” came to place the curse on the newborn princess Aurora.

On the surface this seems to be just another modern Disney movie, but there are some elements that turn the traditional version of the story on its head, and defy the conventions of most other traditional fairy tales in the process. Without going into the details of the story too much, let’s take a look at some intriguing examples.

The villain is the good guy – and vice versa

Unlike in the traditional fairy tale, Maleficent is not merely a bad fairy who resents not being invited to the christening of the princess. In the remake, she starts off as (and essentially remains) a good fairy, but she is betrayed by Stefan, a man whom she had considered her “true love”, and she has taken revenge by cursing his daughter. Unlike in the traditional version, the curse does not entail death, but places the princess into an eternal sleep, and the princess can only be woken by “true love’s kiss”. In the meantime, the Aurora’s father becomes the formal villain, first by cutting off the young Maleficent wings in order to gain the throne, and later by attempting to kill Maleficent and take over her homeland (more on that shortly). We might also note that no character is purely “evil” as such, and instead we are shown that many of the characters’ actions, however wrong, often come from legitimate feelings of anger and hurt. And on that note …

In the traditional fairy tale, the threat to human life is always external; it is the giant, the dragon, the ogre and the witch. In Sleeping Beauty it has always been the evil fairy now called Maleficent. But in this movie, human beings themselves are the threat, and they are driven by simple greed. They want to take over the Moors, the magical land where Maleficent lives. Interestingly, the Disney Wiki page for the film mentions that the Moors is “home to magical creatures and fairies, whom had no ruler due to their intensely close friendship and trust in one another”  in contrast to the human kingdom ruled by a “ruthless” king. This is a sure indicator of a visionary theme, using the allegories of the human kingdom and the magical Moors to differentiate between the present survival of the fittest mentality and the ideal of altruism and cooperation respectively. 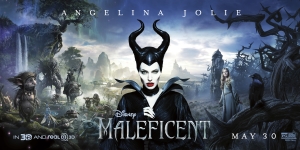 Maleficent (played by Angelina Jolie) is the most powerful fairy in the Moors and though she is not the official ruler, she is the most loved by its inhabitants, some of whom would be deemed physically repulsive in human eyes.

Greed similarly is the inner demon that compels Stefan to betray his “true love” Maleficent and cut off her wings, and this act marks him as the villain from this point. Similarly, Maleficent is clearly defined as the possessor of a good heart early on, when she decides not to doom the princess Aurora to death, and instead creates the key to undoing the spell. She also watches over the growing child from afar, when the pixies assigned to take care of the princess in the forest fail to do so properly. She eventually comes to love the child despite her bitterness over the past. She comes into direct contact with Aurora as a fifteen year old and the two form a mother-daughter type relationship. Soon after realising her feelings for the child, she attempts in vain to revoke the curse.

True love is spirit, not form

In both Sleeping Beauty and Maleficent, the sleeping princess can only be awoken by true love’s kiss. In both stories, the prince is supposed to be the one to wake her. But in Maleficent, the prince fails to awaken Aurora (in part because he had not known her for long), and there seems to be no hope. Overcome with grief, Maleficent kisses Aurora on the forehead – and that is when Aurora awakens. This again is a break from an ancient idea, namely that romantic love is the highest form of love, and that it can come instantly, at first sight. Or at the very least, it is challenging the conventional view of an ancient idea. 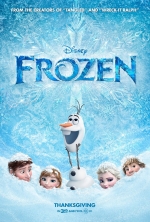 Since Disney is ultimately a commercial company, it might be said that this story reflects the modern age, in particular the rise of feminism. But I have reason to suspect it’s more than that. Last year’s release Frozen (inspired loosely by The Snow Queen) has touched upon exactly the same elements. Its villains are human; its monsters are emotional (fear and greed); it alludes to ideal social states, and again, the “true love” needed to break a spell comes not from the romantic lead, but from the love of a sister. And since Disney is also the world’s most famous vehicle for the fairy tale, surely these developments are not without significance?