Did Quaid-e-Azam Want to Make Pakistan a Secular State? – out now 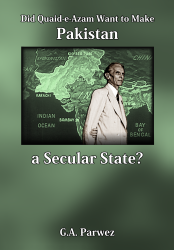 This booklet is Ghulam Ahmad Parwez’s rebuttal to Chief Justice Muhammad Munir’s bestseller, From Jinnah to Zia (1979), containing ample evidence from Jinnah’s written statements and speeches to counter Munir’s claims that Jinnah was a secularist. As one-time counsel to Quaid-i-Azam M.A. Jinnah on matters pertaining to Islam, and as one of the few who could visit him without an appointment, Parwez was in a position to speak with authority on the founder of Pakistan’s political convictions.

Here it is. At last, the book that started my writing career has gone into print. (You have no idea how long I have been waiting to publish this book.) It’s the translation of Kya Quaid-e-Azam Pakistan ko secular state banana chahte tai? (lit. Did the Great Leader want to make Pakistan a secular state? For those of you who don’t know, Quaid-e-Azam was an honorific title used by the Muslims of colonial India to refer to M.A. Jinnah, the constitutional lawyer who eventually became the founder of Pakistan).

I was originally going to explain the full background of how this book links to my work in this post, until I realised that the foreword of the book does exactly that. It’ll be reproduced in my next post.

But in brief: Parwez wrote this booklet in 1980, as a rebuttal to Chief Justice Munir’s From Jinnah to Zia (1979). Munir had argued that Jinnah was a ‘secularist’. Parwez aptly countered the claim, but he overlooked a certain statement attributed to Jinnah – one that would finally be exposed as a fake 25 years later by yours truly.

For a short time, you can get this book – and also the The Qur’anic System of Sustenance – at 25% discount. Details follow.

Did Quaid-e-Azam Want to Make Pakistan a Secular State?

Get 25% off this book if you purchase from CreateSpace, using the following discount code at checkout (limited offer):

You can also get The Qur’anic System of Sustenance at the same 25% discount if you apply this code at CreateSpace: