The Battle for Marghdeen – Introduction

This title has already been released. Further info here 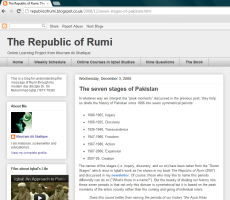 Anyone who has read Systems will know that its publisher, Libredux, is named after the ideal social system based on the Cohesive Ethics Theorem. When I used that name, I had no plans for it other than to publish the novel. But now, and quite unexpectedly, Libredux is taking on its second title, this time penned by the Marghdeen Learning Centre’s Khurram Ali Shafique.

At around the same time as I was formulating the theorem for the novel, Mr Shafique was formulating a theory of his own. His new book is inspired by a pattern he has found in the writings of Iqbal, which reveals a seven stage cycle for the development of a nation, or what Iqbal called the ‘collective ego’.

The book, titled: 2017: The Battle for Marghdeen, is due out on 14 August 2012 (coinciding with Pakistan’s 65th independence anniversary). I’m reproducing the Introduction below, to give you an idea of what it’s about. Further details will come later.

NB: Marghdeen is a fictional city on Mars, representing an ideal society as conceived by Iqbal in his epic poem, Javid Nama.

Khurram Ali Shafique has one of those rare gifts of being able to find patterns in the most unexpected of places. His discovery of the ‘seven stages’ in Iqbal’s works, (having first seen the connection between Iqbal’s epic poem Javid Nama and his famous Reconstruction lectures) is most intriguing and has wider implications for the study of history with an essentially inductive method. This is not to suggest it is a tool of prediction, but it does provide a method for analysing the psychological direction in which a given society is moving as a ‘collective ego’. Moreover, it serves to illustrate the universal principles that motivate all nations in pursuit of a Higher goal, and to also show what happens when these same principles are neglected. 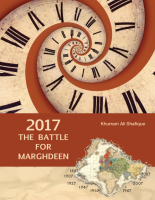 In this work, Mr. Shafique has looked at Pakistan (and also Bangladesh) as a case in point. The most interesting part of the cycle can be seen at stage four – the ‘freedom’ stage (1947-67). At first glance it seems thatPakistanis not moving as we might predict in light of the cycle of stages. As Mr. Shafique shows, this is because the ‘freedom’ stage marks the point at which individuals and small sections of Pakistani society actively began to focus on individualistic goals instead of collective goals. Some commentators on the history of Pakistan have similarly concluded that there is a point of departure from the ‘Pakistan idea’ in the same period. The main difference between most of these commentators and Mr. Shafique however is that Mr. Shafique has illuminated the fundamental reason for the departure in clear terms. ThePakistanidea was the Muslims’ collective basis of partition in 1947, but the point of departure also becomes manifest soon after 1947. The implications for the later stages, especially the final one we have entered as of 2007 (‘creation’), are very interesting indeed, if not alarming, depending on how one interprets the data.

Yet Mr. Shafique has also shown that surface appearances rarely if ever represent the whole of reality. In fact the decision and actions taken by a collective ego or nation are based, in his words, ‘either on the real goal collectively adopted thirty years earlier, or its misinterpretation’ (emphasis mine). What this means is that the collective ego will always choose between one of two directions, or what the Quran calls the ‘two highways’; and this has obvious implications for that much misunderstood concept called the ‘Two Nation Theory’. Again, as Mr. Shafique puts it, whether or not Pakistan proves true to herself ‘will depend, eventually, on whether or not its people manage to make its history a success story. That in itself seems to a daunting task just now, but this pattern itself might be a key to the solution’.

In other words, if the Pakistani nation can become consciously aware of its choices, it will be in a better position to make the right one and so succeed in the final phase. With this in mind, he has not only outlined the double nature of Pakistan’s path using some compelling evidence, but he has also supplied what he sees as the defining goal for the last phase, and the all-important turning point (2017) which will ultimately determine the outcome. Will Pakistan recognise her true nature? Will she transform into Marghdeen?

Whether or not Pakistan succeeds in the end, her journey through its seven stages nevertheless stands to offer invaluable information on the universal principles that motivate all nations in pursuit of a Higher goal.

And in any case, Mr. Shafique is optimistic, for he believes – based on what his theory truly implies – that there is no such thing as an evil age. Indeed he is, as Iqbal once described himself, ‘almost a fatalist in regard to the various forces that ultimately decide the destinies of nations’. This work thus presents an exciting new development not only for Iqbal and Pakistan studies, but for the field of history as well.